The Crispy and Crunchy Cashew Nuts

The creamy, crispy and crunchy cashew nuts are cherished for their succulent flavor. They are eaten as a snack, whether roasted, salted, sugared or covered in chocolate, and are often used as a flavorful complement to appetizers, main dishes, and desserts.
Slightly sweet in taste they are relished as a garnish in sweets and desserts.  Along with almonds, they are sprinkled over desserts, particularly sundaes and other ice cream based preparations and is widely used in biscuits, sweets, and cakes.
They are also used in Thai and Chinese cuisine, generally in the whole form as well as used, along with almonds and other dry fruits in various rice dishes and in curry preparations in India, Pakistan and Middle Eastern region.
But that is not all there is to cashew nuts. They are packed with a mix of nutrients and minerals not found in many common foods. Cashew nuts are rich in energy and nutrients. They do have a relatively high-fat content, but it is considered good fat. They are rich in heart-friendly monounsaturated fatty acids like oleic and palmitoleic acids that help to lower LDL or bad cholesterol and increase HDL or good cholesterol.
Despite having a relatively high-fat content, cashew nuts are considered to be low-fat nuts. In fact, cashew nuts contain less fat per serving than many other popular nuts, including almonds, walnuts, peanuts, and pecans.
Cashew nuts are a rich source of soluble dietary fiber, vitamins, and minerals as well as numerous health promoting phytochemicals that, combined with the nut’s zero percent cholesterol content, help to protect against diseases like diabetes and gallstones as well as cancer.
Being a rich source of minerals like manganese, potassium copper, iron, magnesium, zinc, and selenium, eating just a handful of cashew nuts every day protects against mineral deficiencies. They are also rich in many essential vitamins such as pantothenic acid (Vitamin B5), pyridoxine (Vitamin B-6), riboflavin and thiamin (Vitamin B-1).  These vitamins are essential for the metabolism of protein, fat, and carbohydrates in the body but need to be replenished from external sources.
The nuts also contain a good amount of Zea-xanthin, an important flavonoid antioxidant, which helps prevent age-related macular degeneration.
The high energy density and high amount of dietary fiber have a beneficial effect on weight management, but only when eaten in moderation. Because of their high-fat content, over-consumption of cashew nuts, can cause unwanted weight gain. The oxalates in cashews also become concentrated in body fluids, crystallizing and causing health problems in people with pre-existing kidney or gallbladder problems. Cashew nut allergy is common, especially in children. The symptoms may range from simple itching to severe form of anaphylactic manifestations, including breathing difficulty, pain in the abdomen vomiting and diarrhea. Individuals with known allergic reactions to nuts should be cautious while eating cashews.
While cashew nuts have a high amount of the stabilizing oleic acid, a monounsaturated fatty acid, they should always be stored in a tightly sealed container in a cool dry place, preferably kept in a refrigerator to avoid them turning rancid.
Native to equatorial South America, the Portuguese and Spanish seafarers are credited for introducing the cashew nut to the world during the 15th and 16th centuries. Today it is grown commercially in Brazil, Vietnam, Indian and many Africans countries. The tree is small, spreading and evergreen growing to a height of 10-12 meters.
The kidney-shaped cashew nuts are actually seeds, that grow, partly embedded, on the end of the large fleshy cashew apple. The crispy kernel is extracted after cutting the shell of the nut and is processed to free it from toxins before use. The edible part is creamy white in color, has a smooth surface with firm yet delicate texture and smells and tastes sweet and delicious. The English name cashew is derived from the Portuguese name for the fruit of the cashew tree, “caju” in the subcontinent it is known as “kaju”.

The cashew tree, now naturalized in tropics, is grown under varied climatic and soil conditions and thrives in a tropical climate and coastal sandy land. Unfortunately, it is not cultivated in Pakistan, though it is successfully cultivated in other regions akin to our warm areas. As the cashew nut can grow in tropical coastal belts, it is worth trying to explore its prospects of growth in Pakistan warm areas.

As it is an expensive item not only at home but also in the international market. It is, therefore, worth trying to cultivate it in Pakistan, in pockets where weather and soil conditions are suitable. If the results are encouraging, it can open new vistas of employment to the local people in production processing and packing industries.

The Black Sapote “Diospyros nigra” is a species of persimmon in the family Ebenaceae. It is also called “chocolate pudding fruit” and black snap apple. Black Sapote is tropical fruit mostly grown in Mexico, Central America, The Caribbean, and Colombia. Sapote means soft edible fruit, has no relation with white sapote or mamey sapote. The tree can grow to 25 meters in height. It is an evergreen tree but frost sensitive and can tolerate light frosts. Black Sapote unripe fruits are astringent, caustic, bitter, irritating and have been used as fish poison in the Philippines.

The tree leaves are elliptic-oblong, tapered, dark green, glossy and 10 to 30 long. Black Sapote tree is normally found below 600 meters. The tree propagation is usually from seed required 30 days to germinate. It can retain viability for several months. Some trees are seedless, however, and can be propagated by air-layering or shield budding. The tree takes three to four years to grow should be spaced 10 to 12 meters apart. Normally, trees bear male and female flowers. But in some cases, a tree can bear male flowers. The fruit takes 4 to 5 years from seed. The tree flowers appear in the leaf axils, solitary or in small clusters are tubular and small.

The fruit is tomato likes with an inedible skin that turns from Olive to a deep yellow-green when ripe black markings near the heart of old trunks. The pulp is white and inedible but assumes a flavor, color and texture often likened to chocolate pudding when ripe. Most of the fruits normally contain a maximum of 12 seeds. Its texture like to papaya having the taste and consistency of chocolate pudding. The tree is sensitive to drought, need irrigation in dry areas. If you want to grow Black Sapote in a pot then it is possible. Normally, commercial growers plant seedlings in the pot until they become one to two feet tall before planting them on the ground.

The sapote fruit can be eaten fresh, or with milk. However, this fruit also served as a dessert, accompanied by ice cream, milk, whipped cream, lemon juice, and orange juice. Black sapote tree doesn’t require much fertilizer; hence the organic fertilizer is sufficient. The sapote is pest free, but in rare cases, it can be infected by scales; by cochineals in winter or with spider mites in the summer.

Black sapote gear up on vitamin C, about 100gm offering of the fruit will take care 25% of daily intake, and contains about 20mg of it. It has also a good amount of vitamin A directly from the diet is a healthy practice. Black sapote can be considered quite a good source of potassium about 350mg. The tree benefits of building muscle control the heart’s electrical activity and maintains the fluid-electrolyte balance.

The tree contains a fair amount of calcium at about 22mg per 100gm. Black sapote provides iron in trace amounts after all packed with such a variety of vitamins and minerals? The pulpy nature of this fruit is healthy for the digestive processes. When eaten raw, it is a source of dietary fiber. Black sapote also gives you an instant dose of energy. Read About - Ficus – The Most Popular House Plant 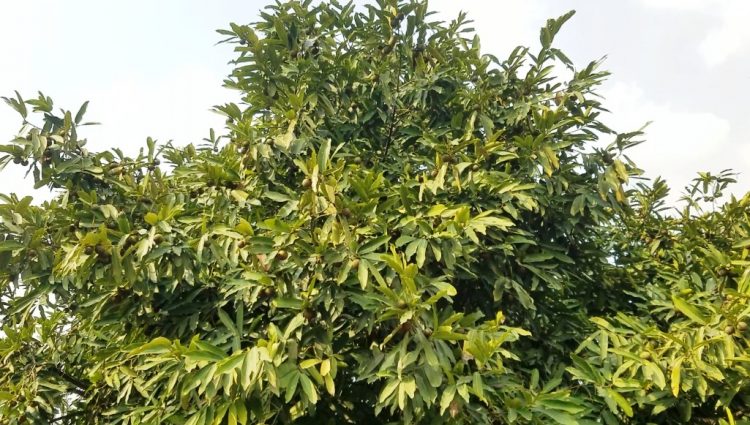 Black Sapote tree can grow to 25 meters in height. It is an evergreen tree but frost sensitive and can tolerate light frosts.[/caption][caption id="attachment_27740" align="aligncenter" width="696"] 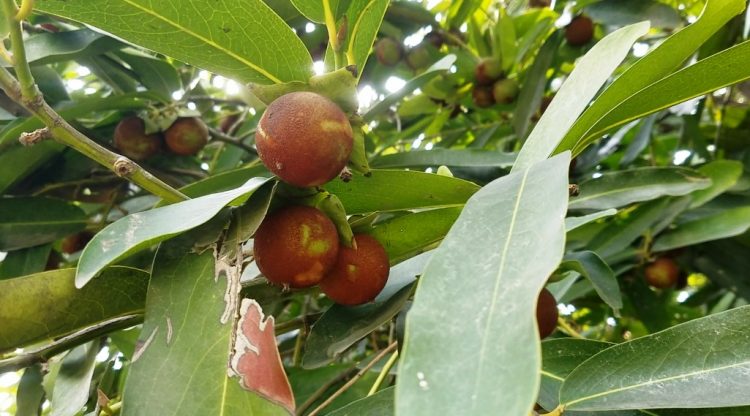 Diospyros nigra is a species of persimmon in the family Ebenaceae. It is also called “chocolate pudding fruit”[/caption][caption id="attachment_27743" align="aligncenter" width="696"] 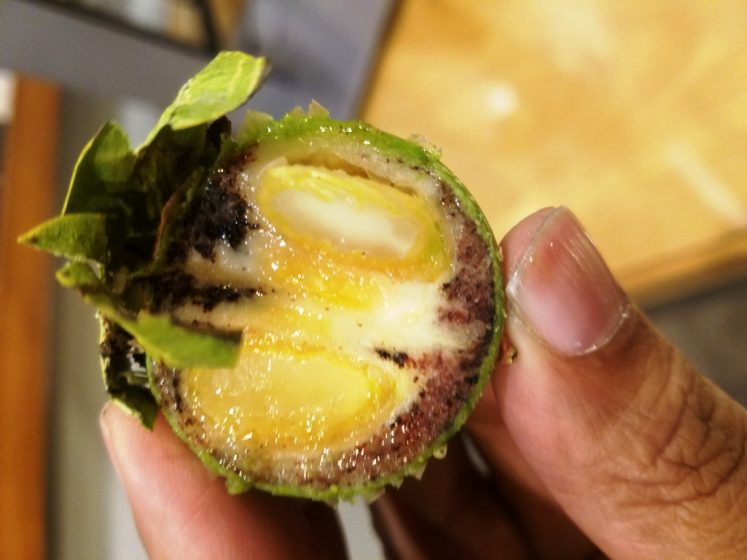 The fruit are tomato likes with an inedible skin that turns from Olive to a deep yellow-green when ripe black markings near the heart of old trunks.[/caption]