The sugar apple is a strange fruit, which taste is just like a pineapple-banana combo. The fruit is looking like an overgrown pinecone; the scaly, green skin is filled with an edible custardy pulp. It’s a good source of fiber and contains antioxidants and B vitamins.” Therefore, it contains low-calorie treat in farmers markets, gourmet grocery stores in the Spanish markets. Sugar-apple is high in energy, an excellent source of vitamin C and manganese, a good source of thiamine and vitamin B6, and provides vitamin B2, B3 B5, B9, iron, magnesium, phosphorus and potassium in fair quantities. The fruit is alike in sweetness to the sugar-apple but has a very different taste like pineapple. The arrangement of seeds is in spaced rows, with the fruit's flesh filling most of the fruit and making grooves for the seeds, instead of the flesh's occurring only around seeds. Source: Charismaticplanet 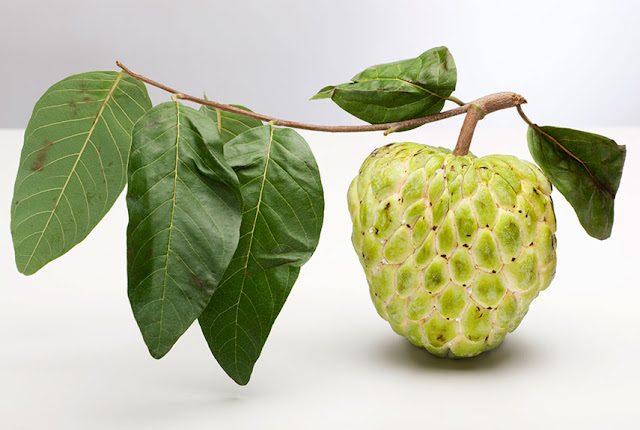 
This hairy fruit looks like a sea creature than a fruit, but don’t let its spines and leathery, red skin fool you. Rambutan taste is very sweet and mildly acidic like grapes. This delicious fruit is full of vitamin C and iron, the fruit’s translucent flesh resembles a boiled egg and is similar to a lychee in texture. This fruit can be found in Asian market and eat it right from the rind, but discard the single seed are toxic. However, in canned form, you can mix it right into a fruit salad for a tropical twist. 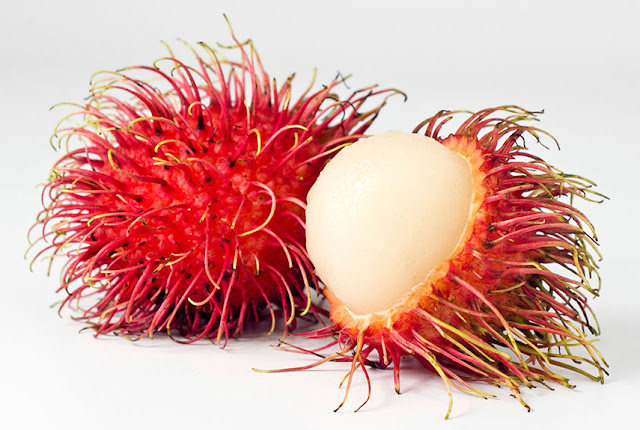 
This is a favourite fruit of juice lovers, because it is only for sipping.  Therefore, only a half cup of Hawaiian noni juice has 15 calories and 1.5 grams of sugar, which is low for fruit juice.  This fruit also contains over 50% of the daily recommended value of vitamin C.” Pick up the nutrient-packed fruit in juice and powder form at health food stores and drugstores like Walgreens particularly during your period. “It was usually used in Polynesian cultures to treat menstrual cramps; preliminary animal studies have also shown the juice of this fruit is linked to cancer prevention and treatment. 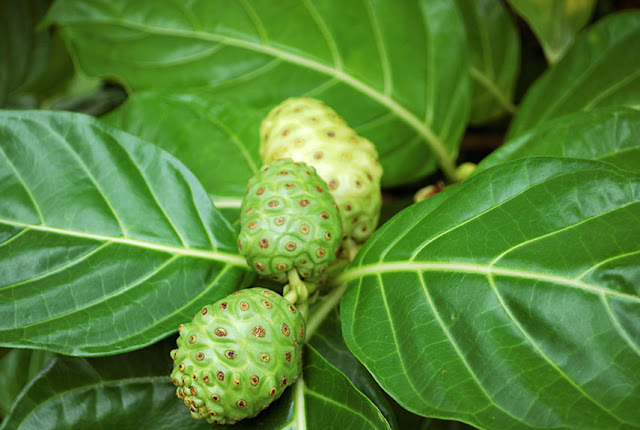 
The spiny, heart-shaped fruit looks edible, partially, when its seeds can be eaten, and they’re loaded with antioxidants, including tocotrienols, a form of Vitamin E which has been shown to fight cancer-forming cells. Annatto is an orange-red condiment and food coloring derived from the seeds of the achiote tree , often used to impart a yellow or orange color to foods, but sometimes also for its flavor and aroma. Its scent is described as "slightly peppery with a hint of nutmeg" and flavor as "slightly nutty, sweet and peppery". To reap the benefits, look for the seeds whole or in powder form in the Latin food section of the supermarket or at Latin markets, and enjoy their nutty, peppery taste as a seasoning on meats, soups and rice dishes and in baked goods. But the super seeds have another purpose: They give butter its yellow color. 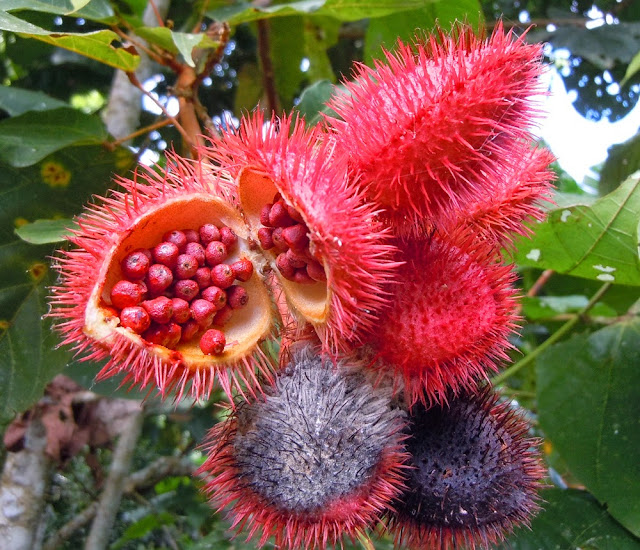 
If you’re a fan of bananas, you’ll go bananas over jackfruit. Under its enormous, prickly, green exterior (it’s the largest fruit grown on a tree), the jackfruit’s numerous bulbs have a sweet, buttery flavor. “It’s a good source of vitamin C and one of the rare fruits rich in the B-complex group of vitamins, which benefit memory and mood and can even ease migraines,” says Dimitriou. “They also increase energy and diminish heart-disease risk.” When cooked; add jackfruit, sold at Asian food markets, to jams and desserts. Or fry them as chips. 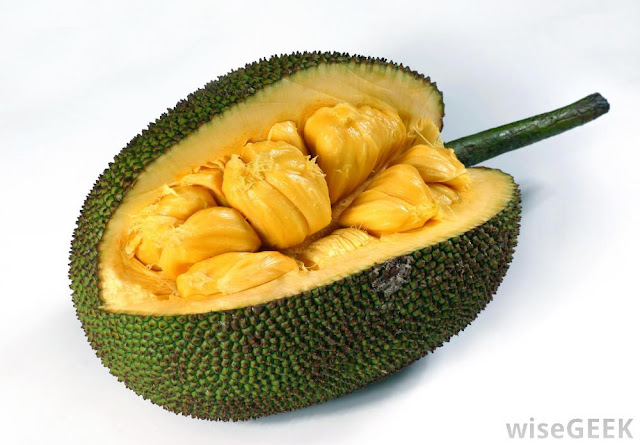 
This fruit has horn-like spines, hence named it “Horned Melon”. It is also called Kiwano, Jelly Mellon, Hedged Gourd, Melano and KiwanoCucumis metuliferus. The horned melon has orange skin/lime green with a refreshingly fruity taste, and textures same to passionfruit or pomegranate or combination of banana cucumber and lime. It is grown in the United States, Portugal, Italy, Germany, Chile, Australia, and New Zealand. The fruit primarily used as a snack, salad, salsa, cocktail and for decoration. Some also eat the peel, which is very rich in vitamin C and dietary fiber. Moreover its health benefits include high in Vitamin A, Beta Carotene and Magnesium, has high water content, is good for weight loss and is packed with other vital minerals. The fruit can be used in cooking, but when eaten raw, most suck out the pulp. 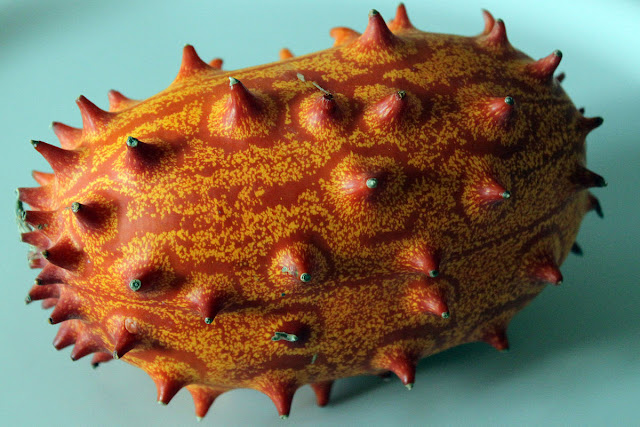 
Carambola or starfruit, is the fruit of Averrhoa carambola, a species of tree native to the Philippines, Indonesia, Malaysia, Vietnam, Nepal, India, Bangladesh, Sri Lanka, Mauritius and Seychelles. The fruit has prominent longitudinal ridges, running down its sides usually five when cut in cross-section, hence its name in cross section, it resembles a star. The entire fruit is edible and is usually eaten out of hand. They may also be used in cooking and can be made into relishes, preserves, and juice drinks. Carambola is rich in antioxidants, potassium, and vitamin C; and low in sugar, sodium, acid, and also a potent source of both primary and secondary polyphenolic antioxidants. 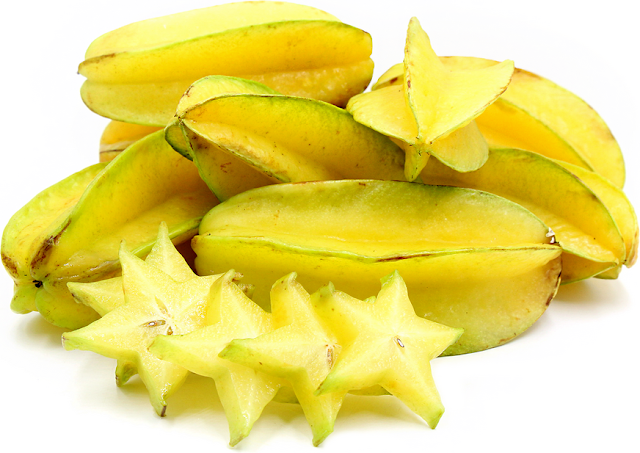 
A pitaya is the fruit of several cactus species indigenous to the Americas. Pitaya usually refers to fruit of the genus Stenocereus, while pitahaya or dragon fruit refers to fruit of the genus Hylocereus. The sour pitayas are a variety that is commonly eaten in the arid regions of the Americas, refreshing, with juicier flesh and a stronger taste. Dragon fruit is a tropical fruit that has become increasingly popular in recent years. People enjoy it for its unique look and taste, and there’s evidence it may provide health benefits. Dragon fruit is a low-calorie fruit that is high in fiber and provides more than one-third of the RDI for vitamin C. Dragon fruit contains several antioxidants that protect cells from damage. These include betalains, hydroxycinnamates and flavonoids.  Dragon fruit may look exotic, but its flavors are similar to other fruits. Its taste has been described as a slightly sweet cross between a kiwi and a pear. Dragon fruit is easy to prepare and can be enjoyed on its own or paired with other foods in healthy recipes. 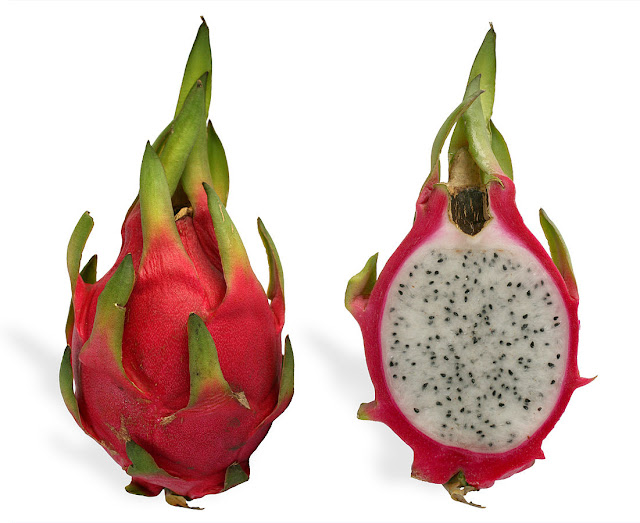 
The agressive looking guanábana contains a docile white custard-like and headily perfumed flesh. It is usually made into a paste, ice cream or agua fresca, but can be consumed as is. But be sure to buy a nice ripe one. The flavour of the fruit has been described as a combination of strawberry and pineapple, with sour citrus flavour notes contrasting with an underlying creamy texture reminiscent of coconut or banana. Soursop is widely promoted as an alternative cancer treatment, however, no medical evidence that it is effective. 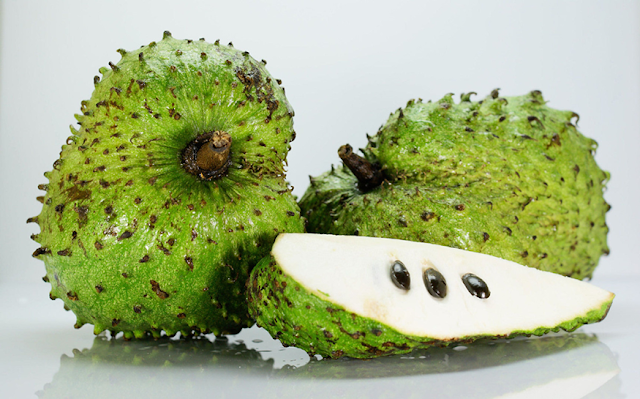 
This fruit is native to South America, grown in green houses to boost its flavor. It is usually found bright red in color but variations can exist, you might also get to see them half green and half red and quite bulky in size.  There are two types to know about, one is the poisonous sibling and the other as passionate as its name. How natural is that, because it is cultivated commercially in tropical and subtropical areas for its sweet, seedy fruit is a pepo, a type of berry, round to oval, either yellow or dark purple at maturity, with a soft to firm, juicy interior filled with numerous seeds. The fruit is both eaten and juiced; passion fruit juice is often added to other fruit juices to enhance aroma. Passion fruit flower is the national flower of Paraguay. 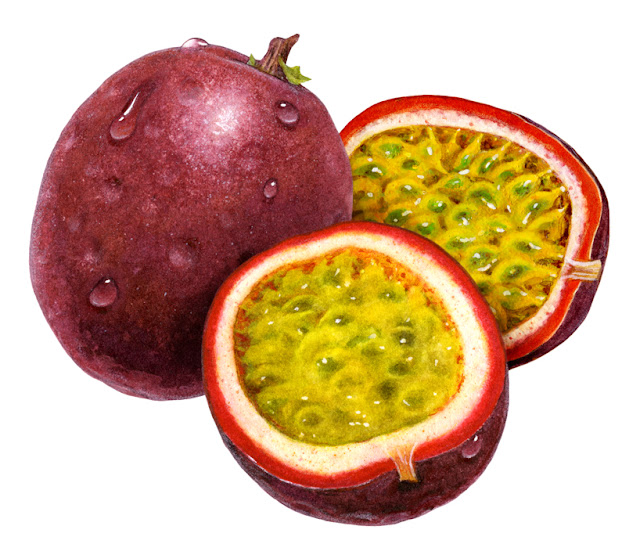 
This is Jamaica’s national fruit. The seeds of this fruit were bought from West Africa into Jamaica on a rumored slave ship and from then on this has become the delicacy around the Caribbean. To eat this fruit, one has to remove the black tops and cut open the fleshy yellow arils, because the reddish region in between is very toxic. Ackee you are very tricky! The fruit is pear-shaped, however when it ripens, it turns from green to a bright red to yellow-orange, and splits open to reveal three large, shiny black seeds, each partly surrounded by soft, creamy or spongy, white to yellow flesh the aril. The dried seeds, fruit, bark, and leaves are used medicinally. 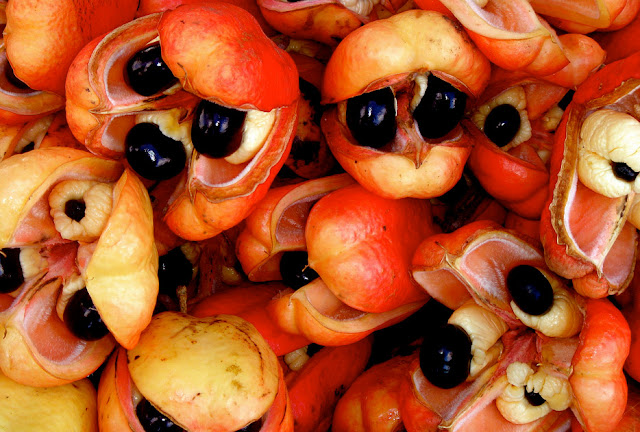 
You may be scared in the first look, but didn’t feel a thing when you’ll swallowed it; it just tastes like a lemon. The fingered citron is unusually shaped citron variety whose fruit is segmented into finger-like sections, resembling a human hand. It is called as such because of its shape, it resembles a tightened octopus. It is found in China and India. It is used to flavor fish and eaten raw with spices when mixed with salad. Buddha's hand fruit is very fragrant and is used predominantly in China, Malaysia and Japan for perfuming rooms and personal items such as clothing, and in cupboards to keep out the smell. The Buddha’s Hand fruit can also be eaten often as a zest or flavouring in desserts, savory dishes and alcoholic beverages or candied as a sweet. The sliced, dried peel of immature fruits is also prescribed as a tonic in traditional medicine. 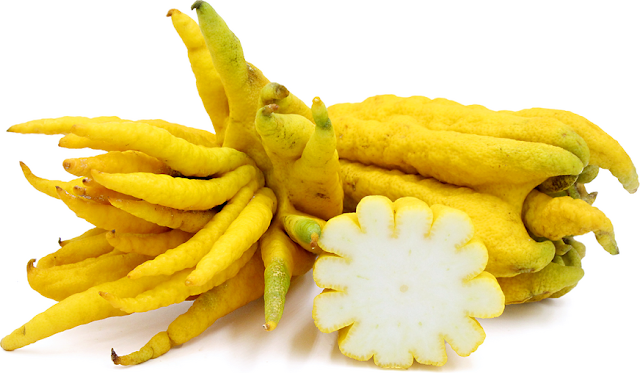 
Tamarillo is known as the popular sibling of the regular tomato we use every day, its paler and burnt in color. The fruit is eaten by scooping the flesh from a halved fruit, when lightly sugared and cooled; the flesh is used for a breakfast dish. The fruit is distinctively shaped seeds in the middle when you slice it in half. Tamarilllo fruit grows in Ecuador, Peru, Bolivia and Colombia and tastes similar to the Passion fruit. The fruit color varies from yellow and orange to red and almost purple. Sometimes they have dark, longitudinal stripes. It is used in making juices and in certain areas of Bolivia it is used in cooking, particularly to prepare the sauce. In the industry it is used as a strong preservative because the fruit contains a high amount of pectin. 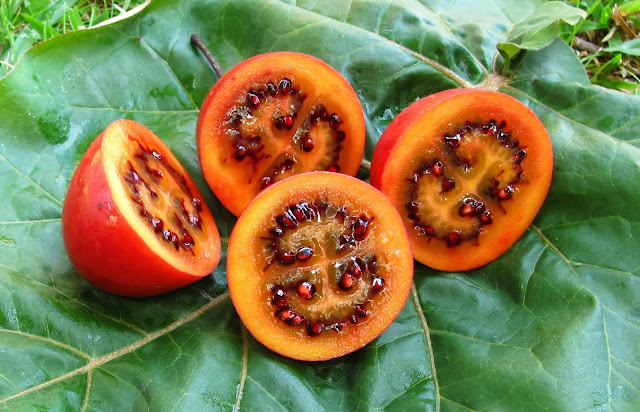