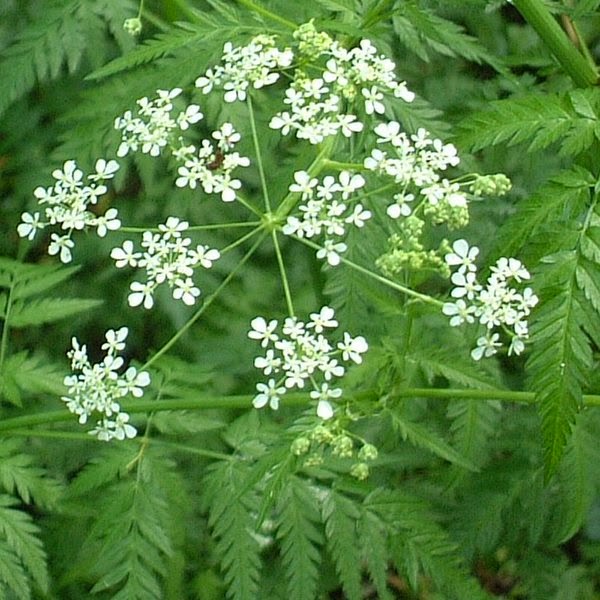 Chervil looks like parsley but is even more feathery. It has a very mild, subtle flavor that tastes like spring itself in a green salad, as long as you don’t overpower it with stronger herbs. It is also sublime in an omelet. Rarely more than a foot tall, chervil is nonetheless a survivor. A hardy annual, it will withstand some frost, and though it germinates slowly, it self-sows with abandon. Much of my chervil-harvesting consists of plucking little clumps that have come up in the wrong place but at just the right time for dinner.

Well, if you to grow Chervil, then it’s obviously very important, that you must know how to grow Chervil. Here we’ll tell you the best idea of growing Chervil. You know, Chervil will grow in full sun but prefers part shade, particularly in hot climates. Growing it in nice, light, moderately rich soil and direct seeding works best. So you’ve to sow seeds outdoors as soon as the soil can be worked in spring, thinning to four to six inches apart. My chervil goes to seed and succumbs to hot weather in midsummer, but by then it has either self-sown its replacement or I have sown a succession crop in a semi shaded spot or under a lath cover such as the frame. You grow chervil indoors in winter by sowing it in a long box, then sowing a new crop in another box before the first crop peters out. To dry chervil cut it before the flowers open. It also freezes well in plastic bags. 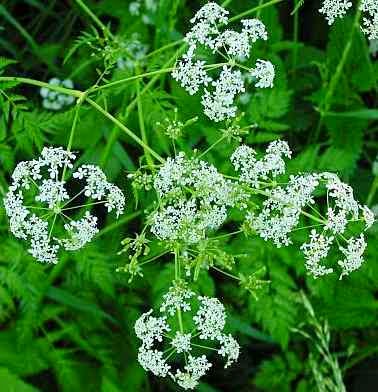 Email ThisBlogThis!Share to TwitterShare to FacebookShare to Pinterest
Labels: Chervil, Herbs and Spices 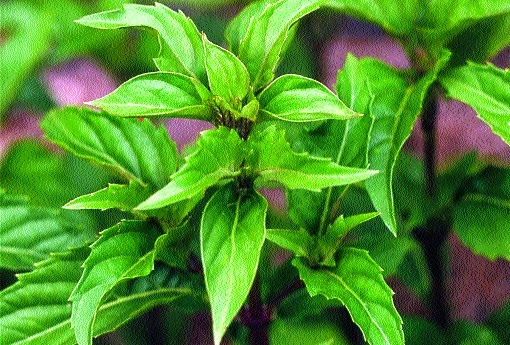 The herbs are all good for cooking and are handsome to look at. They’re only a snip and a taste of the vast world you can learn more about from the specialty herb of Basil that will give you the makings of a kitchen herb garden. Add to them any special favorites you might have.

Every summer the basil to produce tall, lush plants with big bright green leaves, you need to put the leaves, whole into salads, especially salads of sliced ripe garden tomatoes. You’ve to chop the leaves and put them into sauces, soups and eggplant casseroles. And I puree great handfuls of them in the food processor along with Italian parsley, olive oil, pine nuts, garlic and Parmesan cheese to make pesto that glorious Italian sauce that turns a simple bowl of pasta into a delicacy. Every fall the basil I the garden give the first unmistakably dismal sign of winter’s approach.

A few maple leaves just might be turning orange because the trees are diseased or it’s been dry lately; the geese just might be flying south to escape encroaching suburbanization of the country. But there’s no mistaking the blackened mess that is my basil after the first frost. Basil, for all its summer bravado, is a tender annual, and if frost is predicted for the night you can find out there in the dark, picking basil by the armful and making emergency batches of pesto till the wee small hours.
The commonest kind of basil is called “sweet basil” and can grow as tall as six feet in warm climates. Mine approaches 3 feet. It has small white flower spikes, beloved of bees. There are other exotic basils such as anise basil and cinnamon basil, and a bush form (Ocimum basilicum “Minimum”) that is suggested for indoor culture. The only other one I’ve grown is the wonderful purple “Dark Opal” which has pink flowers; but a friend of mine suggests “Spicy Globe”. He says it makes a little round ball, like topiary and is very spicy. I’m dying to try it.

How to Grow Basil 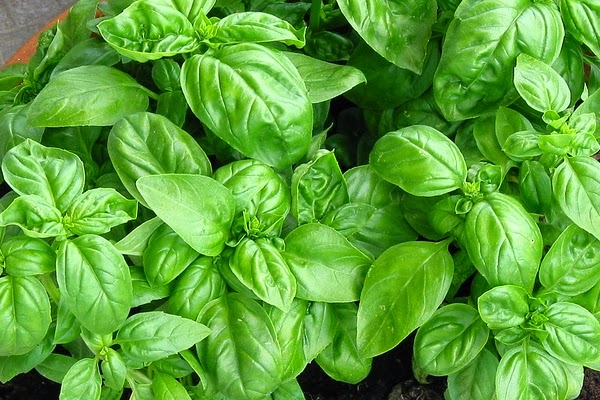 Well, you’ve to grow basil in full sun if possible, in rich, loose, well-drained soil a little on the limy side. Sow seeds outdoors after all danger of frost has passed, thinning plants to about inches apart. When the plants are about six inches tall, pinch them to make them bushy.; if they start to bloom, pinch the flowers off to keep leaf production going, leaving a few to feed the bees, or to self-sow if you live in a warm climate. To grow an indoor crop in winter either sow seeds or root some stem cuttings from your summer garden before that first frost.

Give the plants plenty of warmth and light. Indoors or out, your basil will tell you whether its soil is rich enough if so the leaves will be rich dark green; if not, they will be pale green.  Well to harvest basil, if you want to dry the leaves, cut before bloom and dry on trays or screens in a dark, well ventilated place. Freezing or packing them in oil, however preserves more flavor. Basil also makes excellent herb vinegar.

Email ThisBlogThis!Share to TwitterShare to FacebookShare to Pinterest
Labels: Herbs and Spices

How to Grow Beets

The best reason to grow beets is to make homemade borscht. But you can also boil them and serve them with butter or one of those gooey sauces, you can pickle them, or you can eat the green tops in salads or as cooked vegetables.

Beets can be savored from the first tops in spring to the last dug roots in December, just before the ground freezes. And it is easy to preserve them long after that by canning, freezing or storing in the root cellar. To top it all off, they’re an easy, fairly quick maturing crop. Few bugs or diseases bother them, and almost any climate suits them. The seedlings are frost hardy and can be grown in spring, summer and fall in cold climates, and in fall, winter and spring in hot ones. Most varieties mature in about eight weeks.

Beets are easy to find a place for. They will tolerate some shade, so that if part of your garden gets dapple or half day sunlight, put them there, or between rows of tall crops such as Brussels sprouts. They do not take up much room. You can even grow an extra early or extra late crop in a small cold frame. 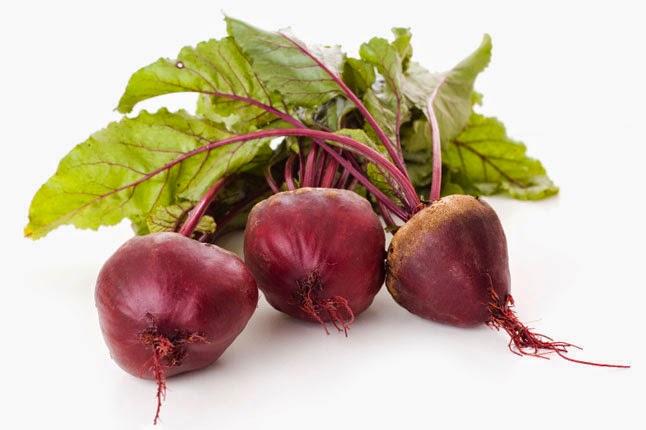 The best soil for beets is a sandy loam lightened and enriched with compost or aged manure (fresh manure makes the root grow side shoots instead of forming one nice round beet). If the soil is acid, dig lime in to raise the pH to at least 6.0. Give beets a luxurious soil, lightening and enriching it to a depth of at least eight inches, and pulverizing it and ridding it of rocks, roots and other obstacles.

Sow the seed as early as you can work the soil. Because in summer and fall crops soak the seeds to help them germinate if the weather is dry. Plant the seeds ½ inch deep in rows a foot or so apart, or plant them in a wide row. In either cases try to sow the seeds about an inch apart or if they’re any closer they will be bard to thin later; but if they’re too sparse you’ll have gaps in the rows. Water the seed bed with a fine spray and cover it with a light layer of straw or salt hay to keep it moist. Plants every two weeks if you want fresh beets all summer; let up in August if it is hot and dry, then make a few sowings in fall or later in a cold frame. 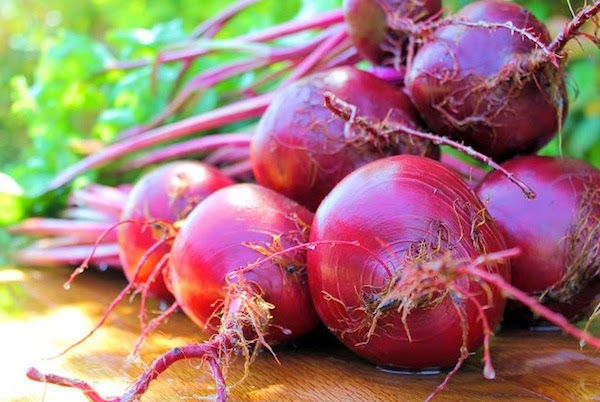 When your seedlings emerge, remove any straw or hay mulch that is covering them. If you have planted in rows add mulch between the rows. It is important to keep the soil moist around the seedlings. When they’re about two inches tall you will have to thin them. Unfortunately nature produces beets in small, inconveniently designed clusters and several seedlings will come up where each cluster falls. Pull out seedling groups so that the ones remaining are about four inches apart, then snip the extras in each cluster so that just one remains. If you get behind and don’t have a chance to thin until the seedlings are taller it is no big problem; those taller thinning will be good in salads. Just be sure to give maturing roots space in which to grow without crowding. The main idea in growing beets is to get them to mature quickly so that they are tender and not hard and woody. This is done by giving them the kind of soil described above, a steady water supply, no weeds to compete with, and proper thinning. If I lived in a warm, dry climate I would preferably use the mulched row technique especially If I were busy and might forget to weed and water enough. Beets are fairly heavy feeders and appreciate a top dressing with compost or a balanced fertilizer when about half grown.

A few beetles might show up but probably will not decimate the crop; neither will the small yellow leaf miner. Apply rotenone for the beetles if necessary if you get leaf miners just pull off the white band damaged leaves. Beets occasionally get a fungus disease. Prevent it by keeping the leaves as dry as possible. If it gets started destroy the affected plants. 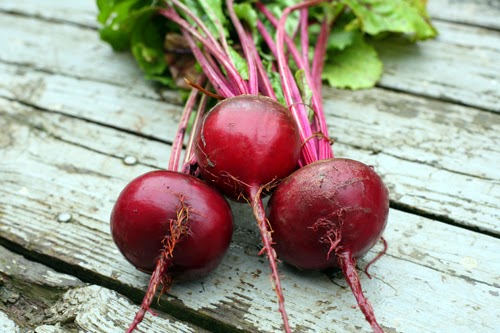 While the beets are growing you can pick up to a third of the leaves off each plant and use them as cooked greens. If you are a real beet green aficionado you can just pick all the greens and forget the roots. When your fingers tell you that the beet roots are two to three inches in diameter, it is time to harvest them. Pull or dig them up and cut off the stems. Leave on an inch or two of stem if you are storing the roots.

The basic tried and true red beet is Detroit Dark Red good for spring or fall. Good early varieties include “Red Ace” Early wonder and little ball a small sweet one. The popular Ruby Queen gives a bountiful yield. Cylindra is long instead of round. Burpee’s Golden is a beautiful red-orange beet root that does not turn everything purple when cut. This is a plus if you’re making potato salad, unless for you, beets should be like real madras guaranteed to bleed. Especially if you are making borscht. 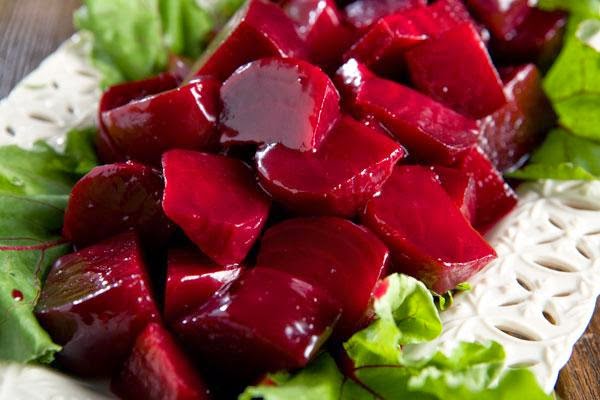